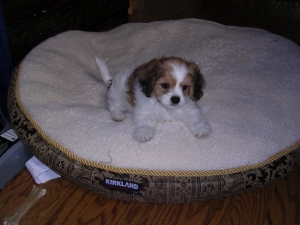 After three and a half years of not having a dog, we finally got another. The kids named her Emiko, and Iris got her from PuppyStars.com. She’s a Cavachon, which means she’s a cross between a Cavalier King Charles Spaniel and a Bichon Frise.

We picked her up this morning at LAX after she flew across from Iowa. As soon as I let her out of her shipping crate, she was bouncing around all over Lily, the Cavalier King Charles Spaniel that belongs to my friend, Paula. We had been dog-sitting Lily during the month of August while Paula and her three kids were in Finland.

Translate Site to Any Language

Japanese Word of the Day

We use cookies to ensure that we give you the best experience on our website. If you continue to use this site we will assume that you are happy with it.Ok